We greatly thank the treatment and kindness received in writing L’Economic and especially the journalist Berta Roig for his excellent work as an expression in these lines. 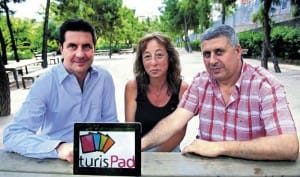 The euphoria for the tablets and everything that comes out of the house Apple is creating the perfect base for generating new business. This is the case Turispad, a young company that wants to join Barcelona this technology with one of the mainstays of the economy of the city, tourism. The business idea is simple and these tourists is to rent Ipad loaded with useful applications for the occasion, such a guide in Barcelona, ​​transportation services, entertainment guides, translators, service companies hire rental, currency converters and international press as well, of course, social networks. “But from this standard configuration can make all necessary customizations and each user can download what they want,” explains Marc Farrés and Alberto Perez, two of the three founding members of Turispad.

Farrés and Perez accumulated nearly ten years of experience in the technology sector through its consulting services and Digiserveis-MF-both consulting official Apple. Three months ago they launched the creation of Turispad, sure had a good business opportunity. “Barcelona has a high ability to attract business tourism and trade fairs, and we want to change the typical image of these visitors moving through the city with the map displayed in your hands,” said Marc Farrés. In fact, the main objective is to attract business entrepreneurs in tourism business and therefore welcomes the recent confirmation as Barcelona Mobile World Capital until 2018 by the GSMA and which will accommodate at least until that date, the Mobile World Congress. “The profile of people who come to this fair is very similar to this technology,” they explain.

The entrepreneurs have already opened talks with government agencies such as the Barcelona Convention Bureau, which depends on the City Council and which also involved the Chamber of Commerce, Catalonia and Convention Bureau, which reports to the Government, with the aim offer them their services. Are also negotiating with hotel chains and time Farrés explains, “the sensations are very good and in 80% of cases there is interest in what we are offering.”

While these agreements were closing Turispad offers the option of contracting services through its website, where the user can specify the place of delivery and collection of the IPAD and which applications it wants. The tablets have Wi-Fi and 3G unlimited and the price starts from 20 euros a day, apart from a deposit to cover any risk of loss. An attractive alternative if you consider that high roaming prices means that many tourists leave their devices at home when traveling abroad.

This first year focused primarily entrepreneurs expect to make themselves known in order to manage growth in the first phase of 200 devices.

However, much will depend on the evolution of the ability to have agreements with hotel chains and organizers of fairs, because, as Perez explains, “an event such as conference phones because you can apply, although only 200 Ipad” . Also according to this growth the partners are considering a new business line with the development of content and applications for tablets. “We believe that a product is sweet and the reception we are having in the first months is good,” they say.